Homepage > Westlife Real reason Of Splitting: After 14 No.1 singles.

Westlife Real reason Of Splitting: After 14 No.1 singles.

The year was 1999 and I was in a seedy nightclub watching five fresh-faced Irish boys, in ludicrous long coats, launched on the world as Westlife.

They were united only in their awkwardness as they sang and moved together, and I wondered at the time whether there really was room for another Irish boy-band, managed by their then little-known manager Louis Walsh, alongside the already established Boyzone.

The answer, as it turns out, was: yes. I’ve watched them perform many times since, everywhere from Dublin to Singapore. 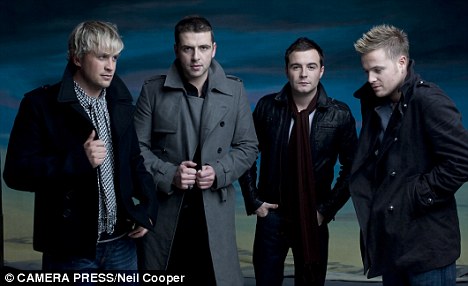 I saw them rehearse on a grimy industrial estate before going on to become the biggest stage act in the UK, selling out Wembley Arena 25 times.

They have enjoyed phenomenal success, with 14 No 1 singles, seven No 1 albums, selling 44 million records in total. And I’ve seen them grow from hesitant boys into confident young men.

And they have decided it’s all over — they’ll split up after next summer’s tour.

It’s an emotional time for them and their army of fans, but, as they told me this week, they’ve been considering breaking up for some time. And it’s real — and for ever.

‘We know some sceptics see it as a marketing ploy and think that we’ll make millions by staging a comeback in three years’ time,’ says Mark.

‘After all, Boyzone and Take That re-formed after saying it was all over. But we have zero plans to get back together.

‘No one can predict the future, but as far as we’re all concerned, it is the end of Westlife.’ 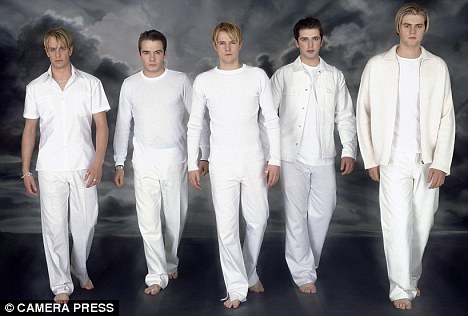 (In the beginning: The boys are pictured with Brian McFadden when they first started out)

They first considered splitting in the summer of 2009 after a one-year break to recharge their batteries.

They found the original spark wasn’t there and initially blamed it on Simon Cowell, though they never explicitly said so, and his record company Syco. In the beginning Cowell micro-managed their record choices, choosing their 14 No 1s.

‘Simon became massive in the States and had less time for us,’ says Nicky.

‘He still came back and picked our singles, but we just didn’t have him seven days a week as we did at the beginning.’

They had high standards to maintain with all their singles going Top Five until Us Against The World went to No 8 in 2008.

For other artists that would still be good, but it signalled something more significant in Westlife as their audience grew up with them and they shifted into more of an album act.

But leaving Syco for another  label, RCA, did not work the magic they’d hoped for.

‘As a band, though not individually,  I think we have lost ambition,’  says Nicky. ‘As soon as your hunger goes, you have to face facts, man-up and make the decision.’

Shane explains: ‘We realised that  we were not enjoying it as much as  we used to.

‘It wasn’t the record company’s fault — they offered us a really big multi-million-pound deal and we turned it down. We said we didn’t want to listen to any more offers. We could have taken the money and not delivered, but we wanted to be honest and end on a high.’

Adds Mark: ‘I really don’t think any one person can be either blamed or take responsibility for the end of Westlife. There was no one incident that resulted in an argument and somebody stomping their foot and saying: “Right that’s it. It’s over!”

‘Everyone slowly started coming round to the same way of thinking, and we waited until we were all of the same mind before we took it seriously.

Mark, Kian and Shane were originally friends from Sligo in the west of Ireland and had their own band. It was Shane’s mother who knew Louis Walsh and got them introduced to him.

Walsh put together the five-piece hit-making machine in 1998, bringing in Nicky and the long departed Brian McFadden.

Louis believed, initially, that they were making a big mistake in splitting.
Kian says: ‘At first, Louis said: “No, don’t be silly. It won’t happen. It will sort itself out.” Then I told him we were thinking of putting out a Greatest Hits album and that the next tour will be the last. When I told him that the thought of breaking up was in everybody’s mind, he said: “No, no, no!”

‘Then, when we were out in Asia just recently, I emailed him the press statement announcing the split. He repeated that he thought it was a mistake, but once it was made public, Louis seems to have come around.’

Says Shane: ‘He told us we were being very brave. He said we could probably keep doing it for as long as we wanted, but we were right to end it on a high.’

Mark thinks Louis will cope without them. ‘Part of his mechanism is about being strong, so I don’t think he is actually going to break down and start crying over the demise of Westlife.

‘But I think, deep inside, it’s a sad day for him. We have been a big part of his success, and he has been a massive part of our success.’

The four boys are naturally wondering whether they will remain close to each other.

‘I probably know them better than my own brothers, which is freaky but true,’ says Shane who is from a tightknit family of seven children.

Kian and his wife Jodi are close to Mark and his partner Kevin McDaid.

Dublin-based Nicky seems the most detached. He says: ‘I like to think we will meet up and have a pint and a laugh — why not? It would be silly not to. But at the beginning, we’ll probably all want to find our own individual space.’

When Brian McFadden left the group in 2004, unhappy with their musical direction, they thought they would have to disband. But, urged on by Walsh, Cowell and their fans, within weeks they completed a triumphant tour and knew they were secure. McFadden’s departure still rankles with Kian.

‘Me and Brian have had words about everything that happened. I told him I was unhappy he left our band high and dry four weeks before a big tour. He said he was thinking about it in his terms and I said: “Well, think about it in my terms.”

‘I am not going to lie. I love Brian as a person. He is a fantastic character, he’d give you the shirt off his back. But he is also a loony tune.

‘I thought once one member of the band leaves at that early stage, that’s it. I was probably the one to have that reaction more than anybody else. I thought we were done and dusted, and I found it strange at the time why he would want to do that.

‘He couldn’t cope with having four other guys telling him he had to do things. He wanted to be his own person and be the free spirit that he actually is.’

Nicky, too, admits that there was resentment at the time. ‘But we have been out with him since and discussed our careers,’ he says. ‘If he was to ever do anything again with Westlife, that would be very special.

‘For different reasons it may never happen — ever. Or it might happen on the last tour. I think it would be nice, and I hope we do sing with him again one day.’

McFadden may have been the first to crack, but he wasn’t the only one finding it tough to conform to the restrictions of being in a boy-band.

Shane is a bit sheepish when he admits it now, but in the early days, they were all encouraged to say they didn’t have girlfriends so their fans could imagine they were footloose, fancy-free and available for them.

Even then, Shane was in love with his childhood sweetheart Gillian Walsh, now his wife and mother of his three children, —Nicole, six, Patrick, three, and young Shane who will be one in January.

‘I lied, purely to protect her. She was just starting university and was a normal girl in class.

Nobody knew she was my girlfriend, bar one or two of her very close friends. But there were 5,000 people in the college who didn’t know, and so they didn’t treat her any differently.’

No one had a tougher time in the band than Mark Feehily who, desperate to cover up the fact he was gay, was in denial to himself, friends, family — and the group.

‘Pop magazines would ask me questions about my ideal girl and I tried to think to myself what she would be.

‘I tried to be honest. I don’t like to look at that period of my life as if I was lying to the fans. I tried my best to be as honest as I could, but I also had some figuring out to do.

‘I come from rural Catholic Ireland. It was a big deal in my head and I made an even bigger deal out of it. Looking back on my life, my family still love me, everyone loves me even more now, but at the time it was not easy to view things that way.’

The lowest point, which was also a turning point for Mark, came at the height of the band’s fame in 2001 with the release of their third album World Of Our Own, which spawned three No 1 singles. He was left alone in a hotel in London while the rest of the band went off to see family.

‘I stayed in bed practically the whole weekend watching TV and was quite depressed. It was horrible. I had never felt so lonely. I was stopping myself walking out the front door of the hotel and meeting somebody and falling in love with them.

‘That was rock bottom. I felt empty and alone. This was at the height of Westlife’s early fame, so it just goes to show that things aren’t always as they seem.

‘Something cracked then — and grew. It took two or three years, but I finally began the process of coming out, which involved telling all my friends back home and my family. Later, I plucked up the courage to speak to the other guys, and then I met my boyfriend Kevin. We went on holidays and weren’t trying to hide.’

A huge moment for Mark personally was the overwhelming approval of the fans at a concert at Croke Park stadium, Dublin, in June 2008 when he told the crowd: ‘I’d like to say a massive thank you to my boyfriend and I love you very much.’

He says now: ‘I barely got to  the end of it. I was so choked  with the scream of support the crowd let out.’

Mark and Shane — Westlife’s lead vocalists — both plan solo recording careers, with Shane most likely continuing to be managed by Louis Walsh.

Nicky, by contrast, says: ‘For the first couple of years I won’t miss singing, although I will miss the fans and the banter.’

He has been married for eight years to Georgina, daughter of the former Irish PM Bertie Ahern, and sister of novelist Cecilia Ahern. They have four-year-old twin sons, Jay and Rocco. Nicky now plans a career as a TV presenter.

Kian, who is a coach on the Irish version of The Voice, and co-managed recently disbanded girl band Wonderland with Walsh, is thinking about forming a new boy-band to manage. He and wife Jodi are expecting their first child in January.

The success of Westlife made them among the richest young men in Ireland, with an estimated fortune of around £10 million each.

Some of them have lost more than others in the Irish property crash, but none have lost their determination. Now, all four are flying without wings.

Webnode, an innovative sitebuilder
Have a captivating website for free!
Get started